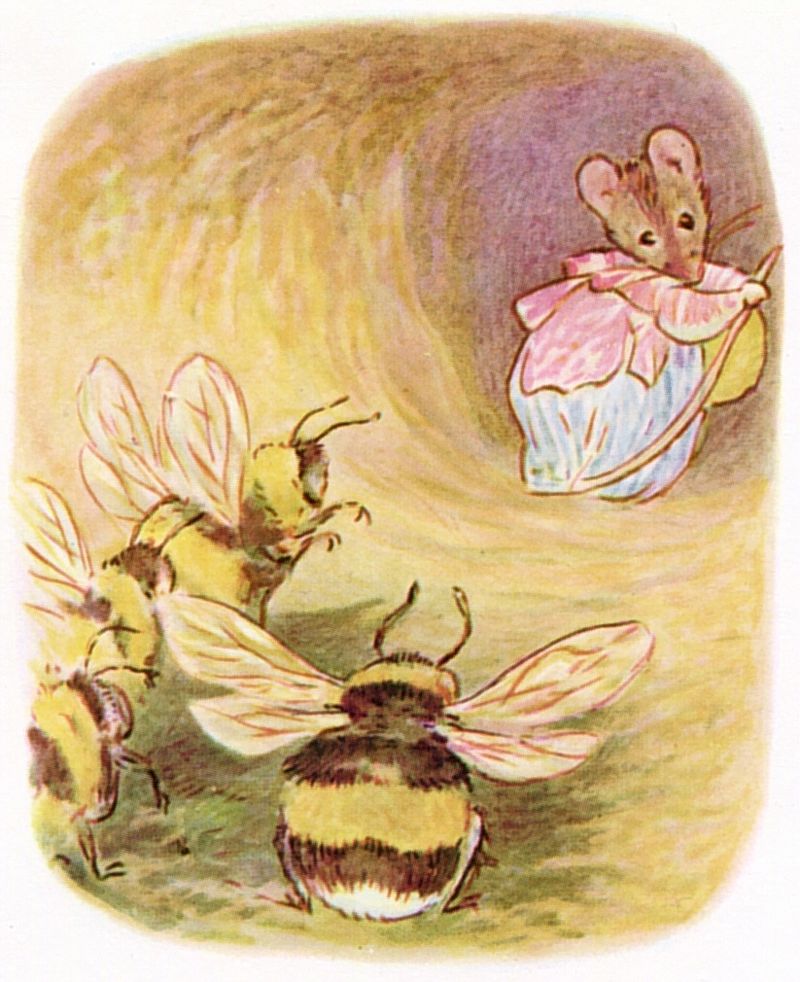 Part of an assignment I had over the Christmas break was to produce a critical edition of the marginal charm, “Against a Swarm of Bees”, found in the Corpus Christi College, Cambridge Manuscript 41. It is one of 12 surviving metrical charms in Old English, curiously living in the margins of the Old English Bede, under a short Latin prayer. If you’re interested in Old English marginalia, I recommend Patricia O’Connor’s research, as she tries to reframe the way we look at the Old English Bede by taking its marginal works into account!

Now, please sit back, relax, and enjoy my critical edition of the Bee Charm, including my own (wobbly) translation!

The marginal Old English metrical charm, “Against a Swarm of Bees”, referred to often as the Bee Charm, can be found in the Corpus Christi College Cambridge MS 41. The manuscript contains a translation of Bede’s Historia Ecclesiastica Gentis Anglorum, known more commonly as the Old English Bede. The Old English Bede “survives in five extant manuscripts, dating from the mid tenth and late eleventh century” (O’Connor, 152), yet CCCC MS 41 is of particular note due to the peculiar amount of marginal texts it contains, “including complete homilies, sequences of liturgical material and charms” (Birkett, 465). Aside from the Bee Charm, there are also “three charms to use in the event that goods or livestock are stolen, and a Journey Charm” (O’Connor, 154). The three charms which refer to theft are known collectively as the Cattle Theft Charms, and include Latin incantations that appeal to Christ, the rood of Christ, and different saints. The Journey Charmis the longest charm, and also appeals to Christ and the Apostles.

“Against a Swarm of Bees” uses a vernacular, that is, an Old English incantation, rather than a Latin one, and does not appeal to any Christian figures. It instead relies on the naturally magical properties of the earth; no divine figures or intervention appear to be required for this charm to work.

Traditionally, it is agreed that there are twelve extant metrical charms in Old English (Tornaghi, 439). Metrical charms “alternate prose and poetry”, often with a similar structure, whereby the instructions are written in prose, and the incantations in poetry (439); this rings true for the Bee Charm. Though twelve may not seem like many, the charms have a substantial range of use; from ‘For a Sudden Stitch’ to ‘For the Water-Elf Disease’, as well as, of course, wið ymbe, “Against a Swarm of Bees”.

Many of the metrical charms deal with curing disease, indicating the relationship between magic and medicine in Early Medieval England. This is, Tornaghi asserts, why charms are often included in texts that “deal with medicine”, such as the Lœceboc (440). We are prompted, then, to wonder why charms such as “Against a Swarm of Bees” are included in the marginalia of the Old English Bede, or even why a manuscript like CCCC MS 41 has such an extensive collection of texts in its margins in the first place. If medicinal charms find their way into the margins of medicinal texts, what does that tell us about the Bee Charm’s relationship with the Old English Bede?

University College Cork alumnus Patricia O’Connor’s research aims to “assert the possibility that these marginal texts may have been meant as intentional textual additions to the passages of the Old English Bede they are written beside” (152-153). She stresses that modern critics need to keep in mind that “Anglo-Saxon compilers may not have shared our present preoccupation to compartmentalise texts and perhaps possessed a different rationale for recording these seemingly disparate texts together alongside the Old English Bede” (157). Her research marks the first instance where CCCC MS 41 is read from the perspective that the Old English Bede and the marginalia are one comprehensive piece, so to speak. Setting both the main text and marginalia in a new context could unlock new layers and meanings to the texts, including the Bee Charm, instead of simply viewing it as a convenient place for the scribe to make note of a useful magic charm.

“Against a Swarm of Bees” is written on page 182 of the CCCC MS 41, in the outer margin, tucked beneath a short Latin prayer; the upper and bottom margins of this page remain untouched. There are instances elsewhere in CCCC MS 41 where the scribe utilises the full space of the margins, such as on p.196, where the Old English wisdom poem Solomon and Saturn “completely surround[s]” the main body of the text of the Old English Bede (O’Connor, 152). It is written in a different script to that of the Latin prayer; the ascenders and descenders of the Latin prayer are far more decorative and Gothic. It is thought that the Latin prayer was transcribed first, and the Bee Charm was written down later, in a dark brown ink (Bredehoft, 725).

N. R. Ker asserts that all of the marginal content in CCCC MS 41 came from one hand, and dates it to the early to mid eleventh century, although the texts’ “size, layout, and colour of ink vary widely” (Bredehoft, 722). Subsequent studies of the manuscript have also accepted this argument (Birkett, 465). Bredehoft, in his essay “Filling the Margins of CCCC 41: Textual Space and a Developing Archive”, maps the shifts in the stages of the marginalia scribe’s process, and concludes that the first stage, in terms of content, consists “primarily of various kinds of charms, in both Old English and Latin” (731).  The main body of text is, however, written in a separate hand. It, too, has more decorative and dramatic ascenders and descenders, though they are softer and rounder than the script of the Latin prayer. “Against a Swarm of Bees”, when compared to both the main text and the Latin prayer, appears to have been written down in a more relaxed fashion. It is written entirely in miniscule, with few decorative ascenders or descenders. While there is clear lineation for the Latin prayer, which is evenly spaced and meticulously neat, the charm, a later addition, seems to have been transcribed with less fastidious care. It does appear to follow the lineation of the main text when possible; however the first two lines of the charm are sloped, and the space between these lines is larger than any other. It may be possible that this is due to the manuscript page warping over time. The scribe appears to have noticed this spacing error and as a result lines further down, such as “forweorp ofer greot”, become more squashed together. Bredehoft writes that the “switch from main-text ruling to narrow ruling suggests the scribe’s response to a realisation that widely-spaced text may be an inefficient use of vellum” (727-728).

That is not to say the charm is not neat, however. The scribe uses the Tironian et (⁊) when transcribing the Bee Charm, while for the Latin prayer they employ the use of the ampersand (&) instead. There is nothing to visually denote the difference between the instruction the charm gives, and the direct speech it includes for the reader to use. Instead there is simply a change from imperatives to first person singular forms of verbs, as well as the immediately preceding instruction, “ond cweð”. Tornaghi also points to the vague narrative voice as a reason for this lack of clarity in the charm. This made it difficult to translate at first, as the sudden switch from the imperative to the indicative mood can be jarring, especially when the author appears to enjoy playing with words.

One may enjoy discovering, as I did, the pun on the Old English present, singular form of the verb ‘to be’, which appears as beo, and the nominative singular form of the noun ‘bee’, which also appears as beo. Whether this was purposeful or not, the confused meanings, or the blurring of meanings and intentions, does give the spell a transformative and mystical feel, if not a humorous one. The purpose of the spell is, after all, to prevent bees from swarming; to transform one thing into another, using your will, or ‘magic’.  This is, in part, why I decided to translate “funde ic hit” as ‘I wish for it’. The person who implements the charm is blurring their will with that of the swarm, and thus, in that moment, they are, but they are also the bee. After all, as Patricia O’Connor points out, the “word charm conjures up associations with the linguistic fallacy of magic, the notion that words can have a tangible effect on the real world” (154). Tornaghi goes so far as to say that with magic, “the word becomes a symbol through which the speaker is able to manipulate reality” (440). This charm allows the user to manipulate reality and manifest their desire, not through the power of the Christian divine, but through wordplay. As Flower puts it, magical charms deal with “the discourse between man and his universe” (17).

Against a swarm of bees:

“I seize under foot, I wish for it.

So, earth prevails against each and every creature

and against the great tongue of man.”

And throw dust over them, after they begin to swarm, and declare;

“Stay, you wise-women, fall to the ground,

never to fly to the wood untamed.

Be so mindful of my welfare

As each man is of food and of dwelling.”

22 (they/them) View all posts by kelalexanderm